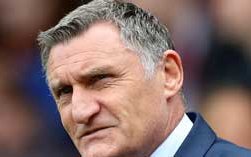 The lads delivered again as Blackpool were well beaten in the end when former Blackburn boss Gary Bowyer’s side left Ewood Park having been seen off 3-0 on Saturday.

Had former Rovers striker Nathan Delfouneso made more of his early chance thing could have been different – fortunately he couldn’t beat David Raya though. This was punished when Charlie Mulgrew’s freekick was finished by Bradley Dack.

Dack, having scored his 15th of the season, was then involved in the second goal midway through the second half, setting up Adam Armstrong to keep his stunning goalscoring run and form going with a 25 yard finish.

Usually scoring them, Danny Graham headed a Curtis Tilt effort off the line to keep the two goal lead, which became three when Armstrong sealed the points to extend the lead over third placed Wigan to eight points, keeping the gap to nearest rivals Shrewsbury at five.

Tony Mowbray was delighted to overcome a ‘dangerous game’ and knows were now almost in sight of the ‘finish line.’

He told the Official Website: ‘It’s a big win. We’ve spoken about how important every game is between now and the end of the season and how much focus we need. We can almost see the finish line but had to concentrate today; it was a dangerous game for us with their recent results.’

Given Blackpool’s recent away wins and the face Bowyer was returning to his former club, Mowbray was pleased with a ‘professional performance’ as Blackburn remained patient before going ahead in first half added time.

‘Blackpool have won away at Portsmouth and Wigan and I`m sure Gary Bowyer will have had them up for this as a former manager here. We knew it was a dangerous game but we put in a professional performance. I said to the lads that if we can keep it solid at the back, we’ve got the players to can make a difference and win a game for us at the other end. That’s the way it went today,’ said the boss.